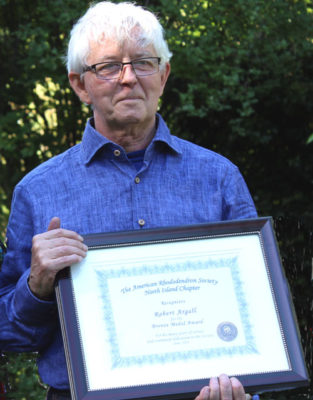 It was with great pleasure that President Judi Murakami presented the American Rhododendron Society Bronze Medal to Robert Argall on June 16, 2018. The ARS Bronze Medal is awarded for outstanding contributions to a chapter and is the highest commendation awarded by a local chapter in the Society.

Robert joined the North Island Rhododendron Society in November 1997 and was Vice President of the NIRS for the 2004-2005 term. Robert has hosted countless tours of his garden estate, welcoming fellow North Island club members, visiting ARS Chapter members, as well as groups and individuals from the general public. Our annual NIRS picnic has been held in Robert’s beautiful property on a number of occasions, and the garden has been a highlight of our fundraising Garden Tour many times over the years. Each year Robert invites the whole of the NIRS membership to his garden for a glorious ‘Tour and Tea’ which usually marks the beginning of our spring season.

Robert has a large collection of rhododendrons and is always generous in sharing his knowledge. People both new to the genus rhododendron and gardeners who have grown them for many years have been inspired by Robert’s rhododendron collection and the artistic placement of them as part of the overall garden design.

Robert has a particular interest in spring bulbs as companions to rhododendrons. As the main speaker at our Chapter meetings on a number of occasions, he has motivated others to extend the rhodo season with spring bulb colour. He has also written articles for our club newsletter, provided short educational presentations over the years, and brought many interesting blooms for the ‘Show and Tell’ portion of our meetings. Robert is always willing to share his love for gardening and, in particular, his interest in the species rhododendron.

It is with great pleasure that we thank Robert for his contributions to the club and congratulate him on being awarded the ARS Bronze Medal by the North Island Rhododendron Society.

The Bronze Medal was presented as part of a framed certificate stating: “The American Rhododendron Society North Island Chapter Recognizes Robert Argall for the Bronze Medal Award for his many years of service and continued dedication to the Society, June 2018.”