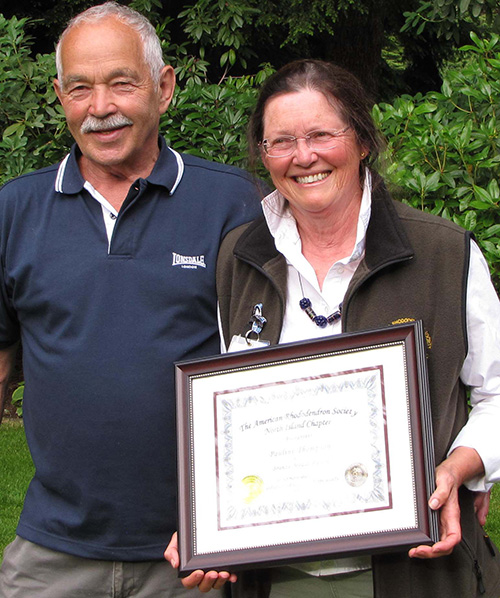 It was with great pleasure that President Paul Wurz presented the American Rhododendron Society Bronze Medal to Pauline Thompson on June 15th 2013.  The ARS Bronze Medal is awarded for outstanding contributions to a Chapter and is the highest commendation awarded by a local Chapter in the Society.

Pauline has served on the Executive since 2008 as a Director and Secretary.  Her knowledge of horticulture and her skills in administrative management and group governance have been of significant benefit to the club. Pauline has taken a lead role in a number of special projects, organized member bus tours, been a regular at our work parties and events, and has been available whenever needed.

We congratulate Pauline on being awarded the ARS Bronze Medal by the North Island Rhododendron Society.  The Bronze Medal was presented as part of a framed certificate stating: “NIRS recognizes Pauline Thompson for the ARS Bronze Award for her many years of service and continued dedication to the Society.”