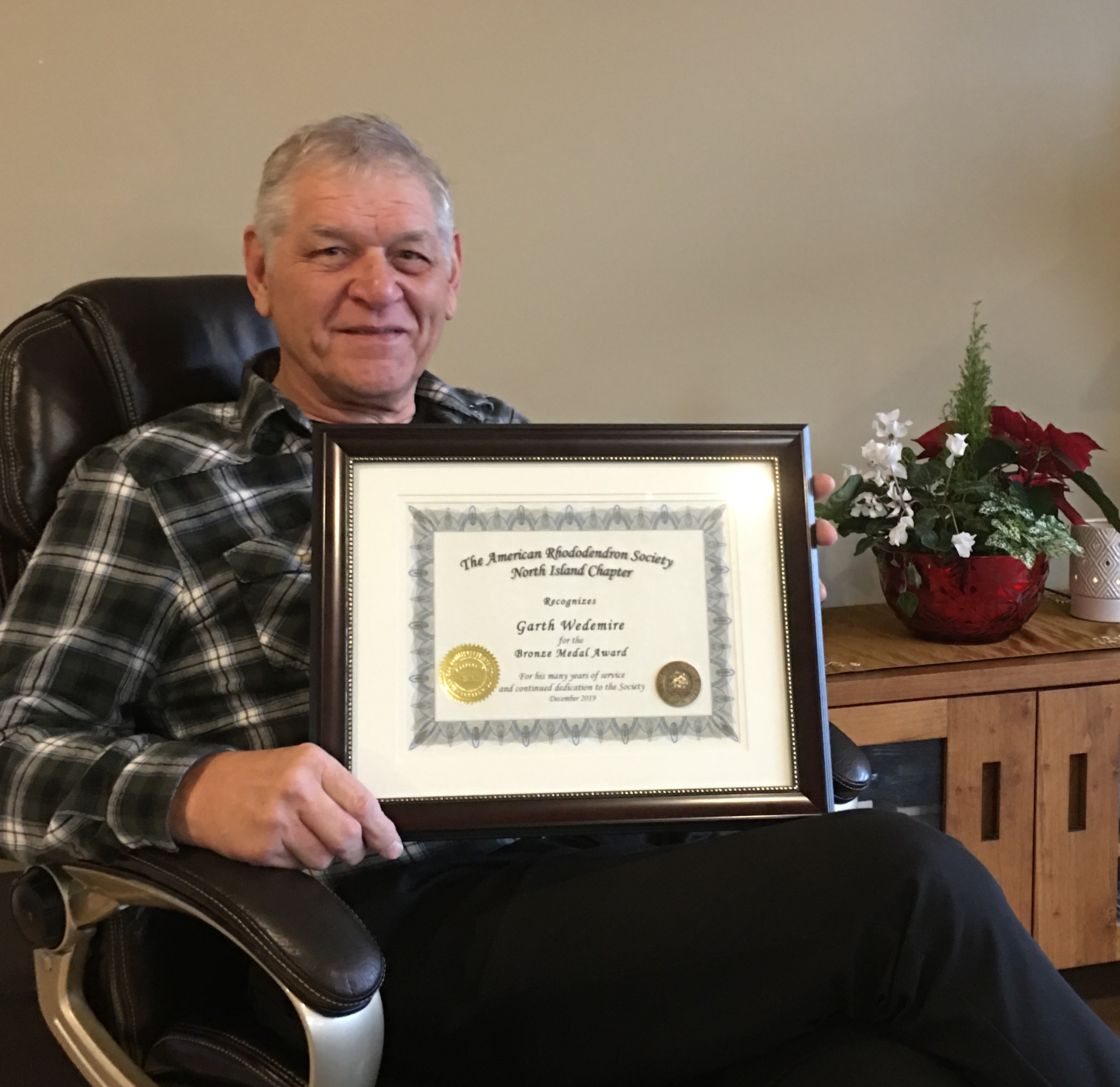 It was with great pleasure that President Maureen Denny presented the American Rhododendron Society Bronze Medal to Garth Wedemire on December 10th, 2019. The ARS Bronze Medal is awarded for outstanding contributions to a chapter and is the highest commendation awarded by a local chapter in the society.

Garth has a long history with the ARS. He has been an active member in his home chapters and across the District, receiving 2 Bronze Medals, the District 1 Award of Exceptional Contribution, and the ARS Silver Medal for his contributions. Prior to moving to our area, Garth was our guest speaker on several occasions and in 2011 became an Associate Member of NIRS. It was always a pleasure when he and wife, Sue Grant, attended a meeting or outing, and we were delighted when they moved to the Valley in 2014 transferring their membership to the NIRS.

Garth and Sue barely had their boxes unpacked when Garth agreed to stand for election and was NIRS Director-at-Large from 2014 to 2016. He continues to assist with our NIRS Website and Facebook page offering technical help, as well as suggesting changes and improvements, and providing assistance with the audio/video equipment for our meetings.

Garth participates actively in our work parties at the Comox Valley Rhododendron Garden, and has helped identify several previously unknown plants at the garden and at various locations around the Valley. Garth and Sue are friendly, welcoming, fun, and personable. They participate fully in our activities, and their contributions have been much appreciated. They have been regular volunteers at our Garden Tours and Rhodo Sales, and Garth has recently become one of our Sale Vendors. They lead a game that is now a tradition at our Christmas festivities, and our well-loved annual Trivia Game is an adaptation of the one Garth developed while a member of the Fraser Valley Chapter.

As a leader in our Propagation Group, Garth has given hands-on demonstrations of propagation and pruning techniques, donated interesting plants, and shared web-based information with the group. Garth and Sue have graciously hosted many of our meetings at their home. He takes part in the Propagation work parties and has made excellent recommendations regarding plant selections for our projects.

Garth has travelled extensively and is generally interested in all things ‘science’. The members of NIRS have been able to benefit from these interests through his many excellent presentations to our club. His photos and use of the latest in technology make these presentations top-notch. With many contacts in the plant world Garth has worked on our Program Committee helping put together a great roster of guest speakers.

As a member of the NIRS, Garth has been incredibly generous with his time, knowledge and expertise. We thank Garth for his many contributions to the club and congratulate him on being awarded the ARS Bronze Medal by the North Island Rhododendron Society.

The Bronze Medal was presented as part of a framed certificate stating: “The American Rhododendron Society North Island Chapter Recognizes Garth Wedemire for the Bronze Medal Award for his many years of service and continued dedication to the Society – December 2019“.